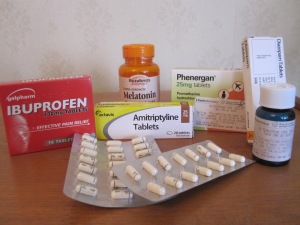 Years ago, I never thought I would be writing an article about medication! I was completely against all drugs, prescribed or otherwise. Having given up alcohol at twenty-four because of it being bad for my body, and having experienced severe sciatica and period pains in the past, without even letting a pain pill past my lips, it’s safe to say I had more than a negative belief about pill popping. Well little did I know, I was in for a shocking turnaround up ahead.

Before I was diagnosed, one of my symptoms was an inability to sleep, at all, due to a nervous system gone wild. I literally didn’t sleep for around seven months, apart from the odd light few hours once a week or so. I was pretty much in a bad way, and I don’t want to spend long reminiscing, because, I can’t remember much of this worse phase, but what I do remember is beyond words. At this time, things had gone beyond my ability to manage things solely with my own skills, I needed something to help calm the pain and anxiety, but because I hadn’t been diagnosed yet, I was told it was just anxiety and depression and I need to go on a drug relative for this.

I wasn’t convinced this was my only reason for not being able to move from the sofa to the bathroom without serious distress, but I was desperate, enter the drug trial period! God what a shock my poor body had after never even experiencing an neurofen! I was tried on thirteen drugs in total and mostly, in the beginning, it simply made things worse.

Amitriptyline: made me hungover and depressed, and when they raised it, I ended up in hospital after passing out. When in hospital, I was given a morphine drug, in the hope that something would finally quash the immense migraine and burning eye pain, this ended up in me blacking out and hitting my head on the sink as I got out of bed, with a prolonged episode of violent spewing on moving even an inch all night long. This was quite annoying considering it happened even when sitting on the potty loo!

Diazapam – This was marginally helpful, but caused a nasty bounce back affect, making me feel tearful later on.

Fluoxetine – Eventually giving in to this anti-depressant, for the first time, I actually felt suicidal. They gave me the standard spiel about it creating a worsening initialling, but the pain was now insurmountable, I thought my armpits we’re going to explode, or a tiny alien come launching out of my chest plate due to a crazed fever in there.

Between my mum and husband, and a “not with it me”, the decision was made to stop this one. I later found out, after diagnosis, at the CFS department, that this is not a drug normally prescribed to ME/CFS patients as it doesn’t often go down well! Hmm, you don’t say!

Zopiclone – A sleep drug, this worked a little, for one or two nights and then did not much else.

Tamapazam – A drug that I’ve found ok results with, yet at the time my body reacted like it did with much else, in a further acceleration of pain and problems.

Pregabalin – My drug of choice! On taking it did begin to slow and calm the nervous symptom problems somewhat. Like a lot of situations along my journey, this drug was actually requested by me. My uncle suggested this. He is a Swedish GP and head of Gothenberg Child Psychiatry. Even though my diagnosis was not yet confirmed, he listened to my symptoms and established that this drug, used for neuralgia, headaches, and in larger doses anxiety could help.

I started on 100mg and moved to 150mg but after starting to get some sleep, I found that it made me drowsy in the mornings so I remained on 125mg for around six months. After this I took only 75mg at night time for sleep. I was told I needed to take it morning and evening but I did what felt right for me. I remain on 50mg at night now and have tried to cease this a few times but as yet it, I can experience further sleep disturbance.

I use back up drugs for a relapse / bad phase where sleep is effected. Tampazapam, half a 10mg pill, or Phenergan 25mg, or Melatonin 5mg can help. I’m hoping soon these will all be a thing of the past for me!

In terms of medication, you have to work out what’s right for you. I still stand by my original feelings that drugs aren’t an altogether good idea for health. However, I’ve lost my zealot nature around them and understand that if used alongside all your other positive, natural and holistic treatments they can form a unified recovery approach. Sometimes, sadly, we may need what we don’t altogether want for a time.

I’ve met or read about a mixture of people needing / using drugs for ME/CFS recovery, in addition to some people not using any. Some people find antidepressants work for them, but lots don’t. For me they simply exeberate the ME. I’ve mostly been quite able to mange depression myself, apart from times of extreme sleep deprivation but after a good night, even with pain or the yummy flu symptoms, I’m back to my optimistic self.

The main thing is to listen to your body’s needs rather than the advice of a GP, which can sometimes be of contradiction to what’s right for you. Use a drug as one of your aids, but not as an answer to all your problems, as they are simply not.